Dr. Vincent Grosso became an Elvis fan at age nine after he watched the 1968 TV Special simply entitled "Elvis". He began collecting Elvis records and was lucky enough to see Elvis perform live in concert on June 26th, 1976 in Providence, Rhode Island. Upon relocating to Florida in 1976, he was also able to see Elvis perform in Lakeland, FL on September 4, 1976. Finally on February 15, 1977 he saw Elvis perform at the Orlando Sports Stadium which was nearly six months before Elvis passed away.

Through all his early years, Dr. Grosso never sang in front of anyone. It was not until 1989, at a restaurant named Bakerstreet that he ever sang in front of an audience. Karaoke, which was popular in Japan for many years, finally came to the United States. From weekly karaoke at Bakerstreet, and later at Mulvaney's Irish Pub on Church Street in Orlando, Dr. Grosso slowly built his singing skills. In 1998, he entered an "Elvis" contest that was sponsored by the E.P. Continentals Fan Club. He won that contest which was judged by Darwin Lamm (publisher at the time of Elvis International Forum), Marian Cocke(former private nurse and friend to Elvis, and Donna Presley (cousin of Elvis). After winning the contest, Dr. Grosso began doing various charity shows for the local Elvis club.

Stage wear produced by B&K Enterprises.Click the banner below to visit their site.

In late 1999, Dr. Grosso decided to improve on his vocal skills and began studying voice under Greg Enriquez in Las Vegas. Enriquez was trained by famous vocal coach Seth Riggs. Dr. Grosso trained his voice for over 5 years, and gradually and steadily his voice improved.

Through the years Dr. Grosso has been able to meet many people who knew and worked with Elvis. He has been able to perform on stage with the Jordanaires in Memphis TN, Las Vegas NV, and Laughlin NV.

View one of his shows.

[Dr. Grosso; Elvis Tribute Artist] In his tribute shows to Elvis, Dr. Grosso uses only the finest costumes and equipment available. His stage costumes are by B&K Enterprises. He brings Bose professional audio equipment to his shows which can fill even a gymnasium with sound. If backing tracks are used in lieu of a band, King Tracks and Golden Voice tracks are used. If you would like to contact Dr. Grosso for your entertainment needs, you may contact him at: [email protected] 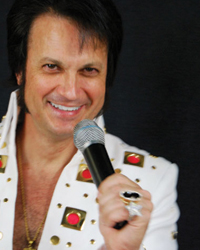 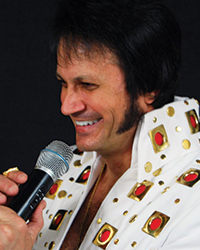 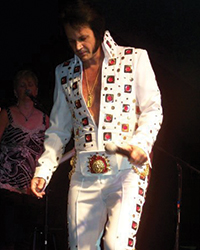 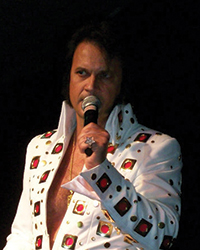 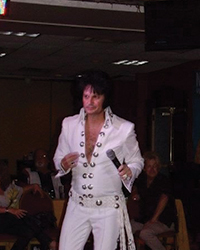 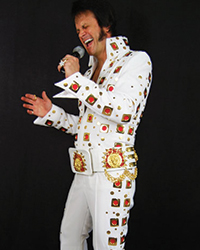